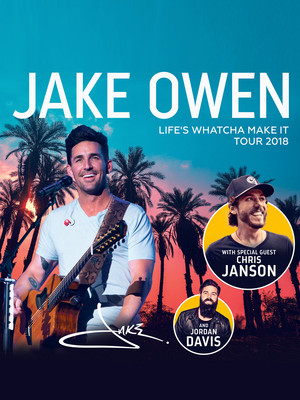 The Barefoot Blue Jean Night singer is on tour again!

Jake Owen's meteoric rise has seen the Florida born singer-songwriter go from playing in his local bar to supporting Keith Urban on his world tour, in a little over six years. Now, with several albums to his name, there are few who can match Owen's ability for crafting chart-ready, sunny country tunes. Don't miss your chance to see him live!

With two number one US Country Chart albums (2011's Barefoot Blue Jean Night, and 2016's American Love) and a further four top ten albums, Owen proves that there are few country stars producing such anthemic, jubilant country as he is right now!

Sound good to you? Share this page on social media and let your friends know about Jake Owen at Kirby Center for the Performing Arts.